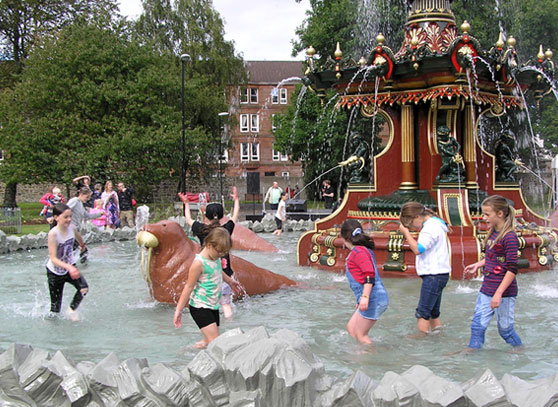 Unlike many fountains produced by the major Victorian foundries, neither the design itself, nor the majority of the features within it were ever re-used, making this a truly unique example of the work of one of the mort respected companies of the day. 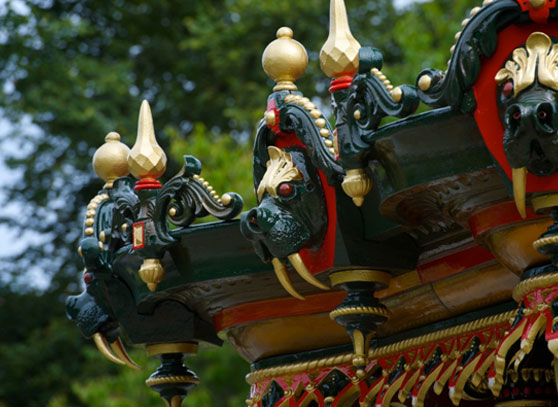 Not only is the design of the fountain unique, the fountain had originally featured an innovative colour scheme, devised by the notable Scottish Colourist Artist, Daniel Cottier. Not only was it highly colourful, but as the artist was known mainly for his work with stained glass, he also included some experimental finishes involving varnishes and coloured metal powders within this, providing a lustre and sheen previously unknown and unfortunately never really repeated. 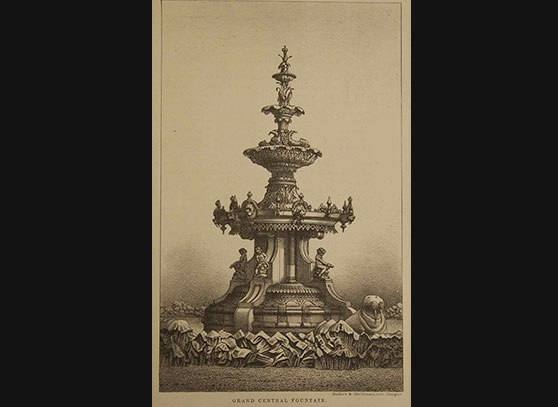 As the fountain was produced before the advent of colour photography, detailed analysis of the lower levels of paint were used to determine as closely as possible the original colours used. However, the illustrations from the huge and exuberant brochure for the opening ceremony demonstrate both how impressive a structure it was and the pride felt by the inhabitants of Paisley. 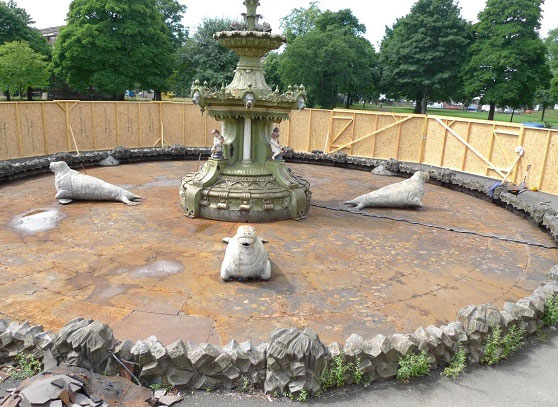 Unfortunately, the fountain had suffered greatly since then, particularly in recent years, with the inoperative fountain having become less a source of pride and more a haven for keen skateboarders. The determination of Renfrewshire Council and the support of The Heritage Lottery Fund provided the opportunity for Lost Art to transform the appearance of the historic site. 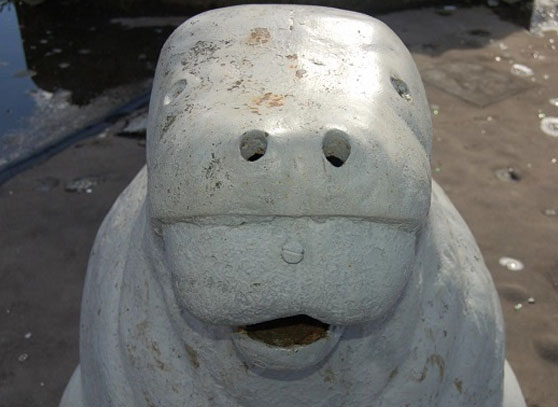 The signature life size walrus figures look sad without tusks or moustaches and are representative of many of the figurative components of the fountain, many of which were badly corroded and had suffered further damage, with others simply missing. 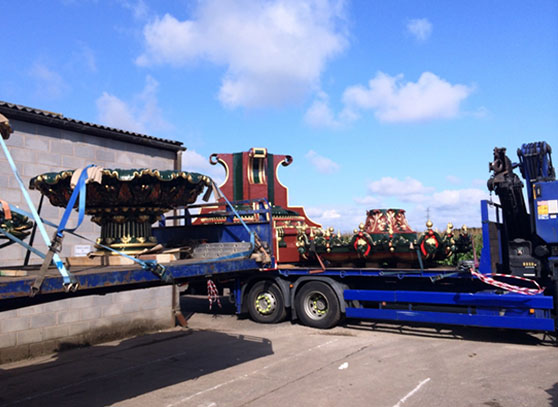 The whole fountain was disassembled and transported to the Lost Art workshop, where all parts of the fountain were cleaned back to base metal and fully inspected. This revealed both more damage than had originally been apparent but also the legacy of previous, poorly conducted repairs to the fountain.
Following the extensive repairs, the replacement of missing items and a general overhaul as, despite the outward appearance and the Victorian reputation for excellence in cast iron production, many of the actual castings had significant flaws that required correction.
Back at the workshop, we also conducted a number of experiments with different paint finishes and techniques, utilising varnishes and various coloured preparations of bronze. In addition, several of the decorative elements were selected to be highlighted by gilding with 24 carat gold leaf. 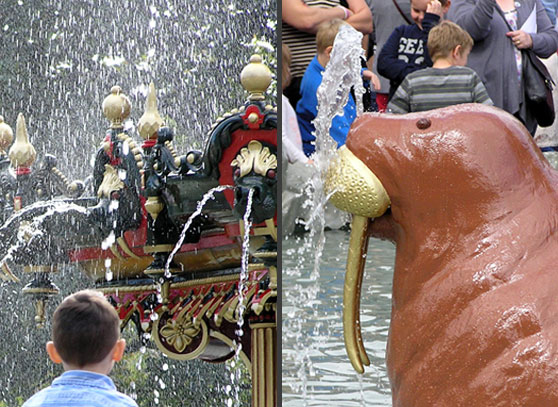 The finished results can only be described as ‘stunning’, though younger attendees at the opening ceremony often chose to refer to it as ‘awesome’. 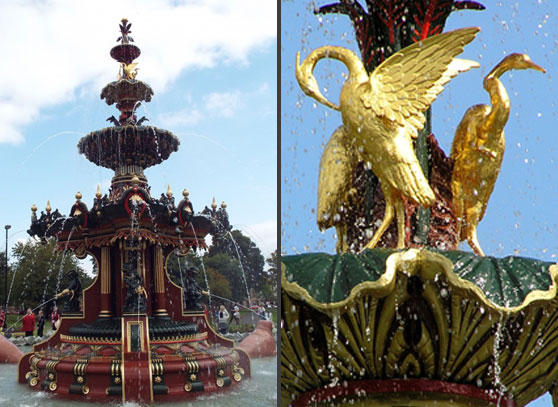 The true scale of the restoration can be seen in comparisons between the walrus figures as they were at the start of the projects and the magnificent beasts they now represent. 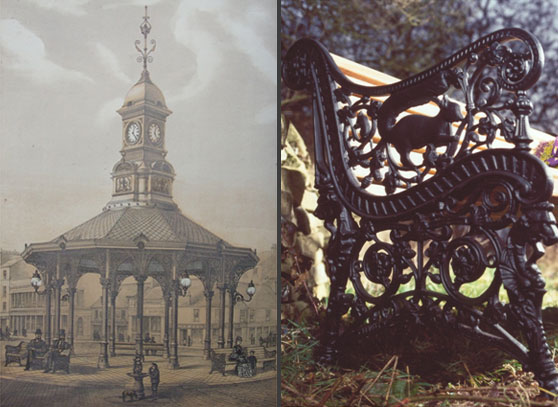 Finally, and as a complement to the fountain and a provision for visitors who wished to sit and admire the fountain, Lost Art limited provided a number of our Squirrel Benches. Also originally produced in Glasgow by the same company that produced the fountain, the seats are also a classic example of Victorian design.
They are seen above in an illustration from the George Smith Company, Sun Foundry Catalogue and photographed just outside the Lost Art workshop.

An 'Interpretation and Restoration' project, funded by Historic Scotland, the Heritage Lottery Fund and Renfrewshire Council

A Grade I Listed Structure, the "Walrus Fountain" was produced by The Sun Foundry, located in nearby Glasgow, as were many of the major decorative and architectural foundries of the day. The fountain can best be described as a Victorian Extravaganza dating from the earliest days of civic decorative cast iron installations. Besides the feature walruses, there are also crocodiles, cherubs, herons and dolphins. Weighing in at 42 tons in total, it is 8.5 metres high and the same again across.

The fountain was donated to the town by the Coates Family and installed in 1867. The purchase of the gardens and installation of the decorative features, including the fountain, were intended as a philanthropic gesture that would provide the workers of the town with a breathing space during their leisure time and also gave the more prosperous inhabitants of Paisley a taste of the cosmopolitan gardens found on the continent. The idea of providing for all classes of society had a further intention behind it, in that it was hoped that it would also contribute to social harmony in the town.

Also known as ‘The Walrus Fountain’ because of the life-sized walruses surrounding the fountain (and now individually named by local school-children), it is believed that these features reflect the interest of the Coates family in Arctic and Antarctic exploration, for which they also provided funds. 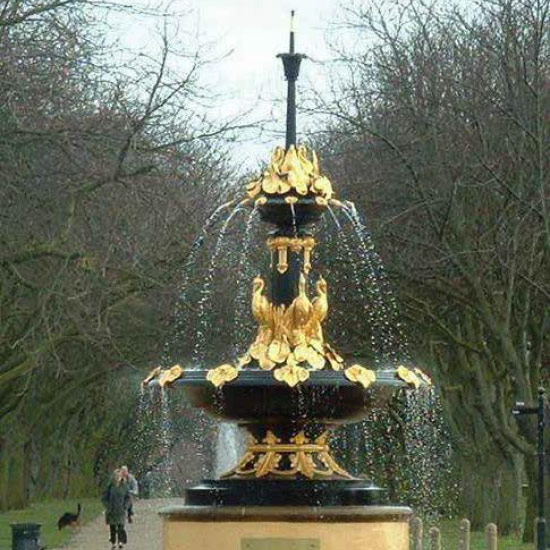 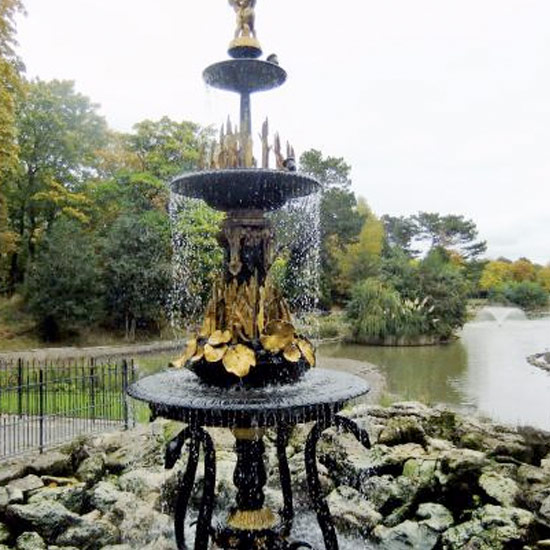 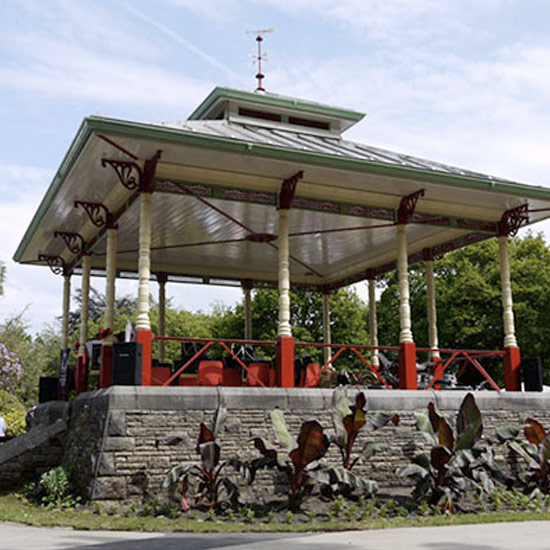 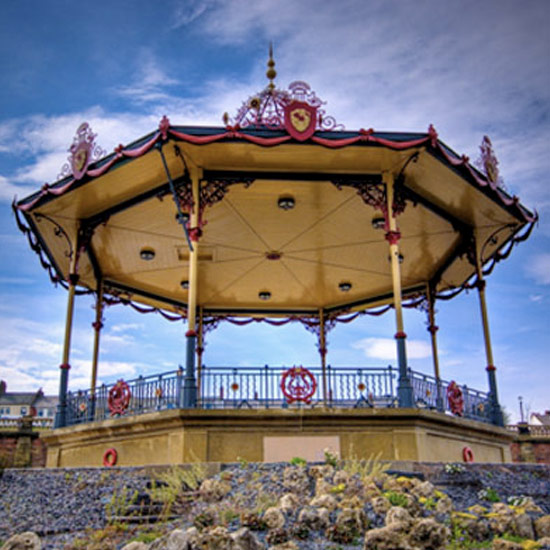